Aim: The manuscript aims to describe the techniques of modification of gums and mucilages and their effect on hydrophilicity and drug release.

Discussion: The interest is increased in the fields of polymers which are obtained from natural origin and used in the preparation of pharmaceuticals. Mucilage and gum are natural materials widely used in the preparation of novel dosage and conventional dosage forms. They are used in the pharmaceutical industry for various purposes like suspending, emulsifying, bio-adhesive, binding, matrix-forming, extended release and controlled release agent. Gum and mucilage are biodegradable, less toxic, cheap and easily available. Moreover, mucilage and gum can be changed to acquire tailored materials for the delivery of drugs and allow them to compete with commercially available synthetic products. These polysaccharides have unique swellability in an aqueous medium that can exert a retardant effect on drug release or act as a super disintegrant, depending on the concentration utilized in the preparation. Drug release mechanism from hydrophilic matrices consisting of gums and mucilages is based on solvent penetration-induced polymer relaxation, diffusion of entrapped drug followed by degradation or erosion of the matrix.

Conclusion: The present manuscript highlights the advantages, modifications of gum and mucilage, their effects on hydrophilicity and drug release as well as aspects of the natural gums which can be assumed to be bifunctional excipient because of their concentration-dependent effect on drug release and their high degree of swellability. 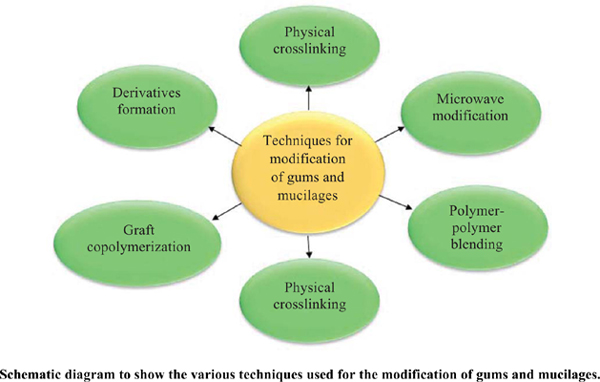