Design, Development and In vitro/Ex vivo Evaluation of Mucoadhesive Buccal Film of Benzydamine Hydrochloride for the Effective Treatment of Aphthous Stomatitis


Background: During the recent two decades, the development of mucoadhesive drug delivery system has been gained tremendous importance to cure many recurrent diseases of the oral cavity. The drug delivery through the buccal route is quite challenging due to limited absorption area, movements of the target region and regular flow of saliva lead to the sub-therapeutic drug level in the buccal region.

Objective: The aim is to develop unidirectional release mucoadhesive buccal film for the mucosal delivery of Benzydamine Hydrochloride (WO2016126217Al, EP0812193B1) and evaluate the effects of a different grade of HPMC polymer (US5980942A) with the presumption to prolong the residence time and therapeutic effectiveness at the target site.

Results: The physicochemical parameters were found to be varied according to the type and concentration of polymer used. On the basis of in vitro drug release, desired ex-vivo mucoadhesive time, mucoadhesive force the formulations F4, F9, F14 and F19 were subjected to ex vivo drug permeation study. The F14 film containing 1% w/v of HPMC K50M was considered optimized final formulation due to higher ex vivo drug permeation. Drug-excipient compatibility was confirmed by FTIR and DSC. XRD of final formulation revealed the amorphous nature of drug. SEM indicated the perfect binding between backing and adhesive layer. 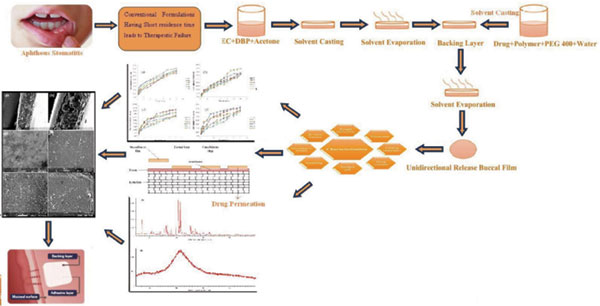