Aim and Background: The rationale of this study is that, treatment of asthmatic Guinea pig with combined administration of Montelukast sodium and Green Tea Extract (GTE) as a single capsule will mitigate the inflammatory injury in the airways and weaken the asthmatic response. Recent patents for the treatment of asthma researched a polyphenolic alternatives for antiasthmatic combination therapy, especially for those patients who remains unresponsive or poorly responsive for current asthma therapy (US7232585B2). Synergistic activity of green tea polyphenols and therapeutic, prophylatic agents are also reported in some recent patents (US20120172423A1, US20150320696A1). The present work is therefore aimed, to study the effect of Montelukast Sodium capsules coformulated with GTE on oxidative stress markers including Malondialdehyde (MDA), Glutathione (GSH) in different organs and Oxygen Radical Absorbance Capacity (ORAC) assay in plasma.

Materials and Methods: Guinea pigs were placed in histamine chamber and exposed to an aerosol challenge of 0.2% w/v histamine dihydrochloride in distilled water using pressurized air driven nebulizer at a pressure of 0.05 MPa-0.106 MPa for one week. After that, they were divided in to four groups of three each; control, asthmatic control, asthmatic treated with marketed preparation and asthmatic received developed capsules. After oral administration of formulations for three days, pigs were scarificed and oxidative stress markers level including cytoarchitectural manifestation in tissues was studied.

Conclusion: It is contemplated that, use of GTE as an adjuvant to anti leukotriene drug played a significant role in asthma management by reducing oxidant injury. Since, studies in animals do not directly translate to human biology, further multi-control studies with better sampled patient population and more number of patients are needed. 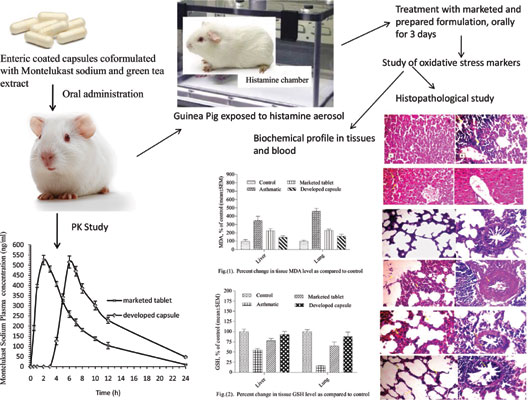