Formulation, In-Vitro and Ex-Vivo Evaluation of Tretinoin Loaded Cubosomal Gel for the Treatment of Acne


Objective: The current work was attempted to formulate and evaluate the topical sustained release delivery systems called cubosomes containing Tretinoin for the acne treatment. The recent patents on various formulations of tretinoin (EP0408370A2) helped in selecting a new formulation and evaluation.

Methods: Tretinoin loaded cubosomes were prepared by bottom-up technique, using varying the concentration of lipid and surfactant and keeping the drug concentration constant, a total of nine formulations of tretinoin was developed. These preparations were evaluated for surface charge, particle size, particle morphology, encapsulation efficiency, in-vivo and in-vitro release studies of gel enriched with cubosome dispersion. Finally, the stability studies of cubosomal gel were performed on optimized formulations.

Results: Significant result were obtained with tretinoin formulation as the drug is lipophilic, so it gives more depot effect on the epidermis and good retention property. The data obtained from the formulations showed that formulation TCF-5 was the optimized formulation which exhibited better drug release and entrapment efficiency.

Conclusion: It can be concluded that cubosomes offer benefits of quick onset as well as the maximal release of drug with fewer side effects. Thus, cubosomes represent a capable transporter having the property to sustain the release of drug, potential to localize the drug in the skin with a possible clinical application for acne vulgaris treatment due to cubosome depot effect on the epidermis. 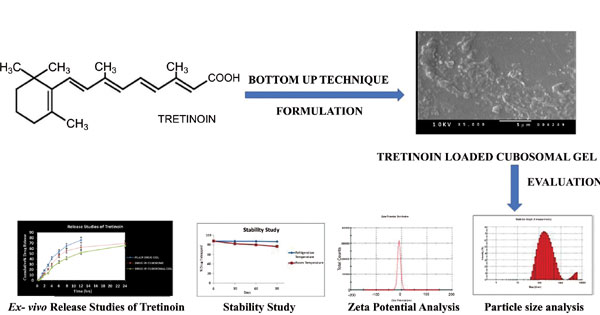