Background: Poor oral absorption of budesonide limits the design of its solid oral dosage form. With this context, multiparticulate pulsatile system of budesonide for chronotherapy of nocturnal asthma was aimed in this study.

Results: Solubility of BD was increased by 22 folds due to inter-particle distribution of BD and polymers in solid dispersions. No changes in characteristic functional groups of BD had indicated the compatibility of drug with polymers as noticed in FTIR and DSC. Fluidized bed processor enabled the production of spherical and uniformly distributed pellets with optimum angle of repose (12-19°) and friability (<1%). Solution layering technique employed in preparation of pellets had facilitated with moderately high BD content (91.5-99.6%) and 100% drug release at the end of 12hr. The pulsatile release pellets (BMPP) produced 6hr lag phase followed by 12hr controlled release. Promised pharmacokinetics was resulted as Cmax of 380ng/ml for BMP-2 and 162ng/ml for BMPP-5 and Tmax of 5 hr for BMP-2 and 12hr for BMPP-5. Increased pharmacokinetics was the direct results of increased solubility of BD due to application of solid dispersion and solution layering on pellets. 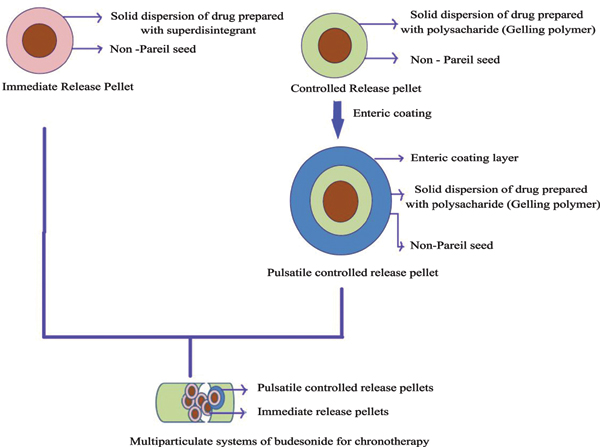