Background: Low aqueous solubility is a major problem faced with new drug molecules. The purpose of this research was to provide a fast dissolving oral dosage form of Gliclazide (GLZ) using the concept of mixed hydrotropy. The recent patents on Adenosine (US20140107059A1), Growth hormone releasing factor peptide (EP0984788A1) and Paclitaxel (WO2002030466A2) helped in selecting the hydrotropes.

Results: Highest solubility was obtained in 25:15 ratio of sodium salicylate and sodium benzoate. This optimized combination was utilized in the preparation of solid dispersions which were evaluated for Xray diffractometry, Differential Scanning Calorimetry (DSC) and Fourier-transform infrared to show no drug-hydrotropes interaction. This solid dispersion was compressed to form fast dissolving tablets. Dissolution studies of prepared tablets were done using USP Type II apparatus.

Conclusion: The batch G3 tablets showed 86% cumulative drug release within 14min with in vitro dispersion time of 33sec. It was concluded that the enhancement in solubility of GLZ is a clear indication of the potential of mixed hydrotropy which is a novel, safe and cost-effective technique to be employed for other poorly water-soluble drugs having low bioavailability. 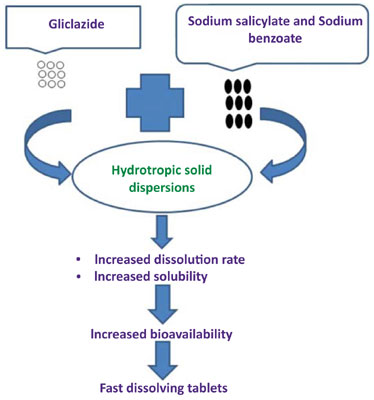